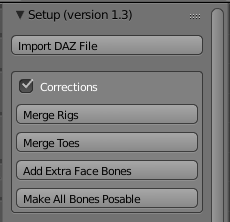 When the character is first imported, each piece of clothing is equipped with its own armature, which may be parented to the main character rig. 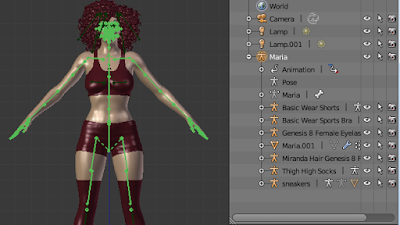 Normally we want to join all armatures which control both the character and all clothes. The Merge Rigs button merges all selected rigs to the active one. Since the main character rig is active after import, the quick way to do this is to press A-key twice (to deselect and select everything) and then press Merge Rigs. 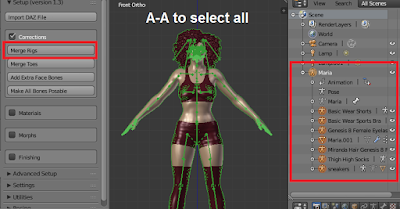 We see in the outliner that the rigs that were parented to Maria have disappeared, and that the meshes are now directly children of the Maria rig.

When the rigs have been merged, we often want to merge the toes. Since Maria is wearing shoes, there is no reason why we should want to pose the toes individually, so we press Merge Toes to let the big toe bone control all toes.

We often want to import facial expressions, as described in the Morphs section. The bones in the face rig then becomes driven by object properties and can not be posed freely. To remedy this, press the Add Extra Face Bones button. The face bones disappears from the viewport.

The face bones have not disappeared; in fact, they have become twice as many. The bones that deform the mesh have been moved to bone layer 8. In addition, there are new bones on layer 32, whose names end with "Drv". When expressions are loaded later on, the "Drv" bones will be driven by rig properties, whereas the deform bones are freely posable. The idea is to first pose the face with a generic expression, and the tweak the expression with the posable bones to make it unique.

This button works almost identically as the one before, but it adds freely posable bones to bones already driven by the rotations of other bones. The driven bones can be found on layer 2. On the same layer we also find extra bones that may be associated with clothes. 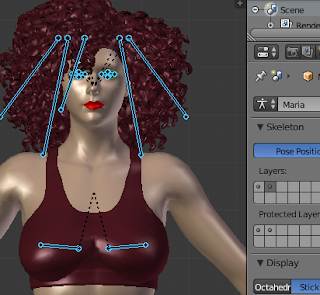 The pectoral bone moves when the collarbone is posed, and the Rotation has turned purple, indicating that it is driven, in this case by the rotation of the lCollar bone. 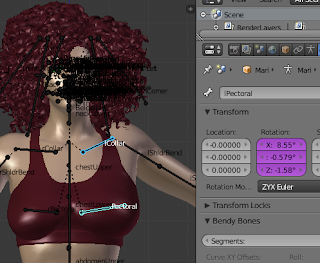 If we want to pose the pectoral bone on top of the rotation induced by the collarbone, we need to make it freely posable. Press the button Make All Bones Posable to achieve this. 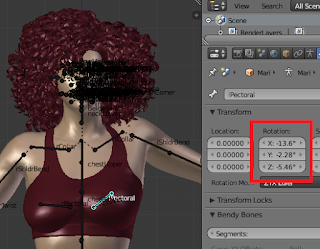 Note: In Blender 2.80 RC3 this button causes a lot of error messages in the console, like this:

These errors appear to be harmless.