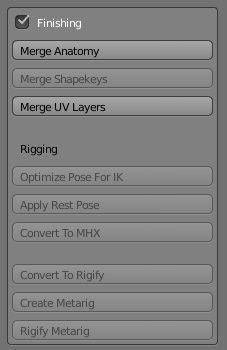 A geograft is a high-density mesh which can replace a low-density region of another mesh. This is typically used to add pieces of anatomy to characters. It is most commonly used for genitalia, but can be used for other types of anatomy as well, such as horns or tails. The idea is to remove the body vertices hidden by the piece of anatomy, and to merge common vertices at the boundary and create a single seamless mesh from the two original meshes.

Note that merging anatomy changes vertex numbers. Hence will not be possible to import morphs afterwards, neither to the anatomy mesh nor to the body mesh. It is a good idea to save the blend file before merging anatomy.

It is possible to merge multiple geografts, but only if all of them are merged at once. Select all geografts to merge, and then shift-select the body to make it active. Again, this is because merging relies on vertex numbers. If the body mesh has been changed in some way, either by merging other geografts or by some other kind of editing, vertex numbers have changed and the body vertices can no longer be identified.

We import a new version of Maria equipped with genitalia. There are also two more meshes - the color and effect layers - but they do not contain any vertices and can be deleted.

The genitals is a separate mesh, and this causes problems because it is not seamlessly integrated with the body, and also because the underlying body vertices are still present.

Select the genitalia mesh, then shift-select Maria's mesh to make it active, and press Merge Anatomy.

The body vertices beneath the genitals are deleted, and the common boundaries are glued together, making the body with genitals a seamless mesh.

Sometimes two shapekeys in a merged mesh are really supposed to be a single one. Consider e.g. the New Genitalia for Victoria 8. Both the genitals and the body have morphs for opening the anus.

Transfer the PBMG8FAnusOpen shapekey to the genitals using the Transfer Other Shapekey button in the Morphs section. The genitals now has two separate shapekeys, but they don't make any sense separately, as the following picture illustrates. 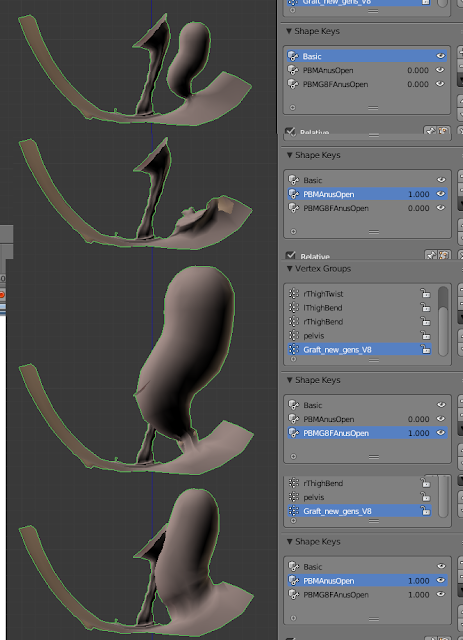 We therefore want to combine them into a single shapekey which is driven by a single rig property. Press Merge Shapekeys. A pop-up menu appears where we can select the shapekeys that we want to merge.

Shapekey 1 is the name of the combined shapekey, and Shapekey 2 is the shapekey that will be merged with it. Select the shapekeys and press OK. The two shapekeys have been combined into a single one.

In Genesis 8, the eyelashes are also implemented as a separate mesh. We can not use Merge Anatomy on these, because the eyelashes are not grafted items, but it is easy to join them to the main body using Blender's standard tools. With the eyelashes selected and the body mesh active, press Ctrl-J to join the meshes without deleting any vertices.

However, there is a problem. When two meshes are joined, the combined mesh has two separate UV sets, one for each original mesh. The UV coordinates for each eyelash vertex is (0,0) in the UV set that comes from the body, and the interesting UV coordinate only exist in the second UV set. So we need to merge the UV sets as well.We see that there are two UV Maps in the 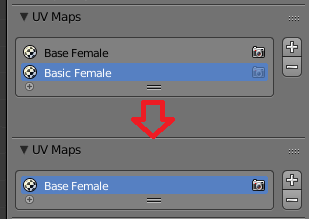 Merge UV Sets merges the active UV set to the render UV set (where the camera icon is highlighted). Select the second UV set and make sure that the first one is the render set, and press Merge UV Sets. .

The UVs for the eye-lashes are merged with the other UVs.

The MHX and Rigify rigs are advanced rigs which allow for IK (inverse kinematics). However, IK works best when the joints (elbows and knees) are slightly bent in the preferred bending direction. For Daz rigs this is usually not a problem for the elbows, but sometimes the legs are almost perfectly straight and the knees are hardly bent at all. In that case IK may not work as expected. To avoid this problem, press Optimize Pose For IK. The picture below illustrates how this affects the Genesis 8 Female.

Note that this is just a pose; the rest pose is unchanged. To turn the current pose into a rest pose, press Apply Rest Pose. This differs from Blender's standard tool because the meshes are also changed to fit the new rest pose.

Beware that when the rest pose is changed, poses are no longer imported correctly to the character. This is not really a problem for a rigified rig, since loading Daz poses to it does not work very well anyway. The MHX rig is quite close to a simple forward-kinematics rig, so loading Daz poses works reasonably well unless the rest pose is modified.

The MHX (MakeHuman eXchange) rigs was developed by myself when I was working on the MakeHuman project. Documentation about the MHX rig. Eventually the documentation should be moved here, for an MHX-converted DAZ character behave slightly differently from a MakeHuman one, but for the time being the MakeHuman documentation will have to do. 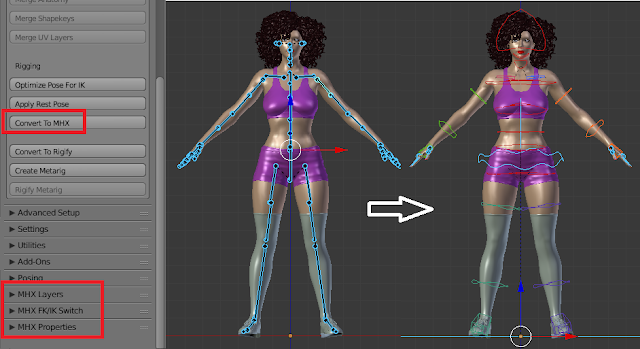 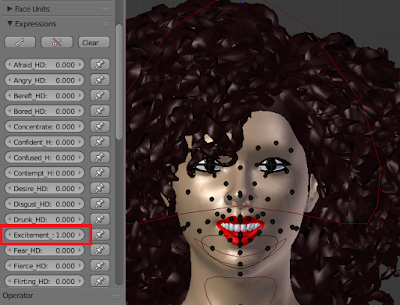 Face bones carry over to the new rig, so it is still possible to do facial posing in the Face Units, Expressions and Visemes panels. Expressions can be tweaked with the face bones on the Face layer (armature layer 9). 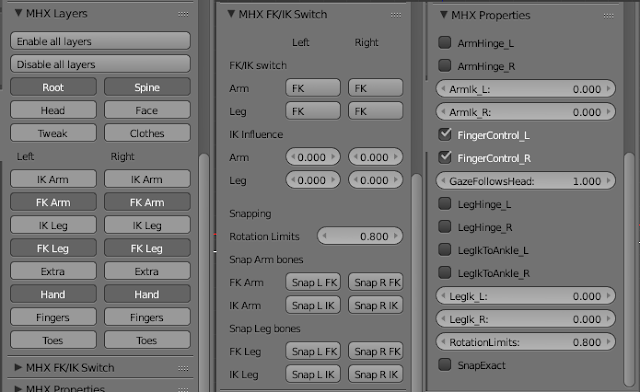 DAZ characters can also be rerigged with the popular Rigify add-on by Nathan Vegdahl. Links to documentation about Rigify in general: 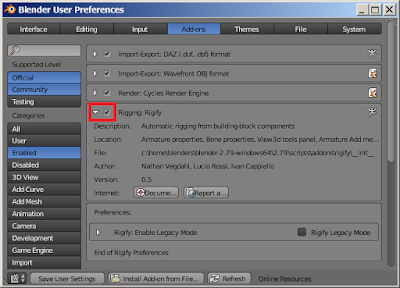 First we must make sure that the Rigify add-on is enabled. It is bundled with Blender and is found in the Rigging category. 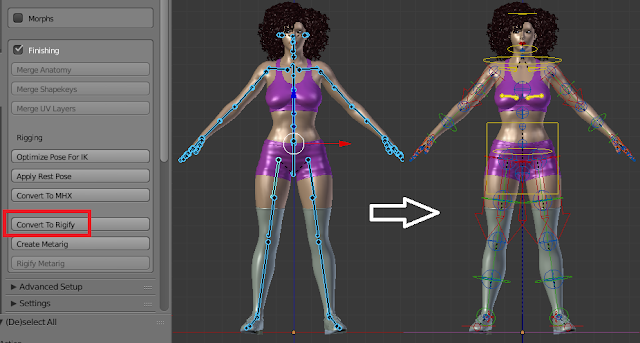 Press Convert To Rigify. After a short time the rig is converted to Rigify. 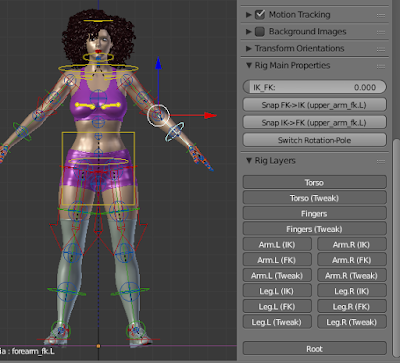 Runtime controls for Rigify are found at the bottom of the "N-panel" to the right of the viewport. Facial bones and rig properties are copied to the Rigify rig, so face units,  expressions and visemes continue to work, including the extra layer of tweak bones 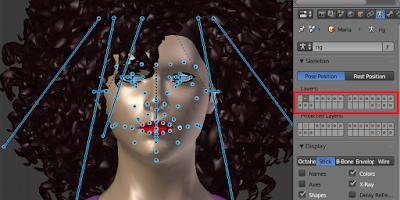 The face bones can be found on armature layer 2 in the rigified armature.

The two last buttons in the Finishing section splits the Rigify button into two steps: Create Metarig and Rigify MetaRig. Having access to the metarig can be useful for tweaking it before the rigify step. I have not used this feature myself, but it was a user request. 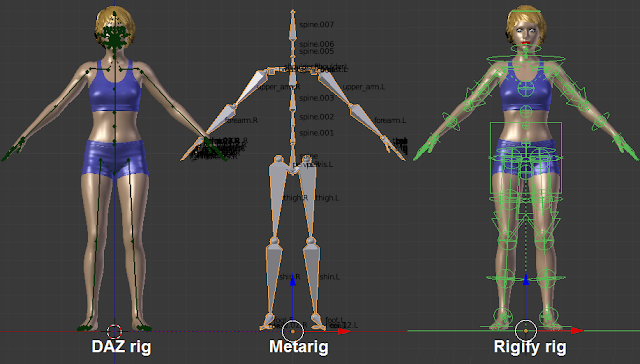