Conversion to particle hair is broken in Blender 2.80. Hopefully it will come back later.

The DAZ importer can convert certain types of mesh hair to particles. It only works if the hair solely consists of stripes, whose UV coordinates are arranged vertically. Fortunately, most hair meshes in DAZ Studio are made in this way. 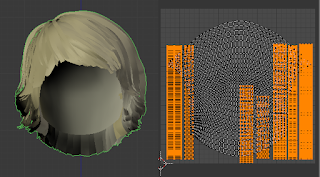 Here we have moved Ana's hair to a separate layer. The hair mesh consists of many disconnected pieces, which are of two types. The actual hairs are narrow bands with UVs arranged vertically, and a skull with a different type of UV coordinates. 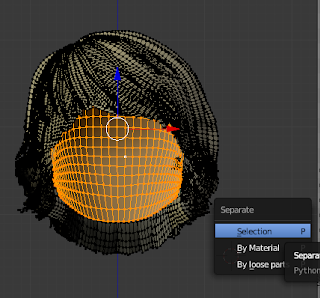 We need to separate the skull from the rest of the mesh. In edit mode, select a skull vertex and hit ctrl-L to select all connected vertices. Then hit P and separate the selection to a new mesh. 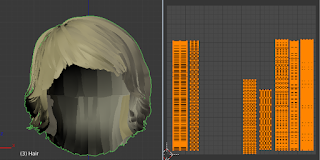 There are now two meshes. Hair consists solely of bands with vertical UVs. This is the mesh that we will convert to particle hair. 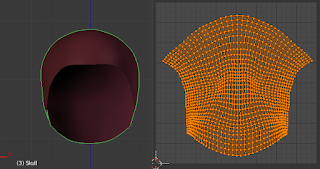 We renamed the other mesh to Skull and changed the color to brown to distinguish it from the hair.The color is not important because it will not be visible in renders.

Since it can be difficult to remember which mesh to select first, the hair and human meshes are listed below the button, so we can easily detect if the meshes have been selected in the wrong order. 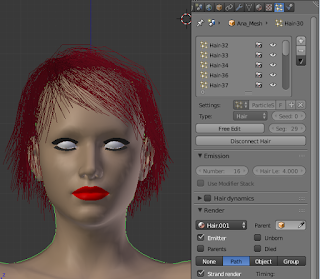 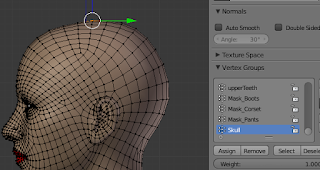 The Skull Group option was set to Top when we pressed Make Hair. The particle density is controlled by the Skull group, which consists of a single vertex located at the top of the head. 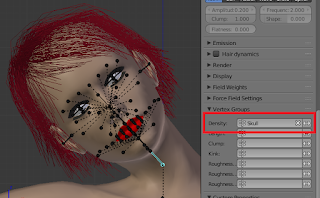 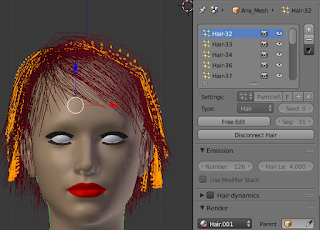 In Particle Edit mode we can highlight the vertices belonging to the Hair-32 particle system. 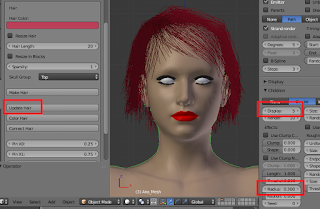 Unfortunately, Blender's particle system is quite brittle, and sometimes (most of the times, actually), all updated particle systems disappear from the viewport, although they can still be selected in the properties window. Work is underway to solve this problem. 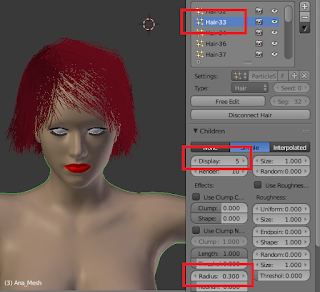 The options of the Hair-33 system now reflects the changes made in the Hair-32 system. 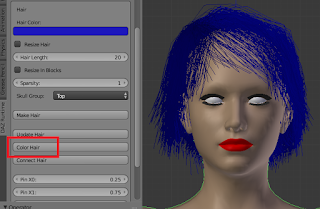 Alternatively, we can grow hair on the Skull mesh instead of the character mesh. We have also changed some options:
With Skull selected and Hair active, now press Make Hair.

A single particle system is created, and all hairs belong to it. The particle system name is Hair-20 (from the Hair Length variable) and it has nineteen segments. We don't want the skull to be visible in renders, so turn the Emitter option off. It is on by default because if we had grown hair on the character mesh we would want it to be visible.

The vertex density varies depending on whether the original stripe was short (short distance between vertices) or long (long distance). This is a consequence of rescaling the hairs. An advantage is that we only have a single particle system to vary the parameters in, so there is no need to use the Update Hair button. 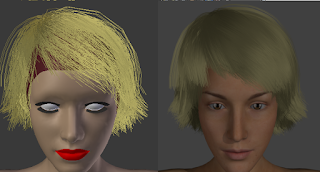 Here is Ana after the number of children has been cranked up, in the viewport and rendered.

All vertices in the Skull mesh belongs to the Skull vertex group with weight one. This works fine because the entire skull moves rigidly with the head. 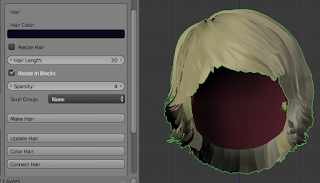 There are now only a few particle systems (six of them, in fact), and they contain many hairs each. 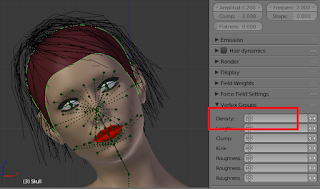 Hair density is not controlled by any vertex group, but posing still works since the skull moves rigidly.

The last part of the Hair section is a utility for mesh hair. When doing cloth simulations we often want part of the mesh not to move, whereas other parts should move more or less. The extent to which a certain vertex is pinned down is controlled by a vertex group.

Select the hair mesh (the scalp should already be separated as another object) with the default settings, and press Add Pinning Group. A new vertex group called HairPinning is created. The weight assignments can be seen in Weight Paint mode. 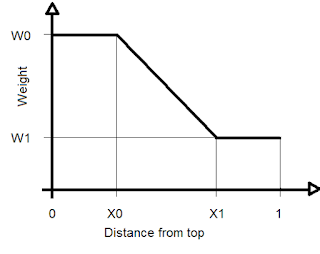 The parameters Pin X0, Pin X1, Pin W0 and Pin W1 affect the weight assignment according to the graph above.

If the default weight assignment was not satisfactory, we simply change the parameters and press Add Pinning Group again. The HairPin group is now updated with new weights.