Assets from Daz Studio are usually awesome, but they often have a high polygon count. This can give problems with performance, especially if you like me use an old Win 7 box from 2009 with only six gigs of ram. Often it is possible to reduce the polygon count with little effect on the final renders.
This is where the Low-poly Versions section at the bottom of the Setup panel comes in.The low-poly mesh can have several uses, e.g. to speed up posing speed. The idea is to hide all the original meshes while posing for maximum speed, and then hide the low-poly mesh and unhide the original meshes when rendering. 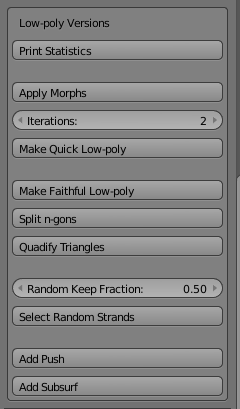 The Print Statistics button prints the number of vertices of all selected meshes in the terminal window. This is useful for deciding which meshes to decimate; it is usually no idea to decimate very small meshes.

The DAZ Importer uses two different algorithms to decimate meshes. The Quick Low-poly utilizes Blender's decimate modifier, whereas the Faithful Low-poly uses an algorithm written entirely in Python. The main drawback with the quick low-poly is that UV seams are not always preserved, which can lead to ugly streaks in renders.

Here is the original character, weighting in 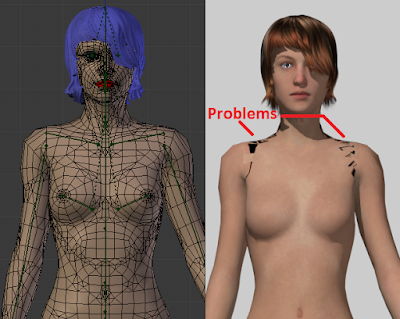 The Make Quick Low-poly button reduces her footprint to

i.e. the number of vertices is almost reduced to a third.

However, there are a number of problems, e.g. the black spots in the should areas. The quick low-poly uses Blender's Decimate modifier, which does not respect UV seams. A decimated face can contain vertices in different UV islands, making the middle of the face stretch over random parts of the texture.This is most easily seen in the UV editor. 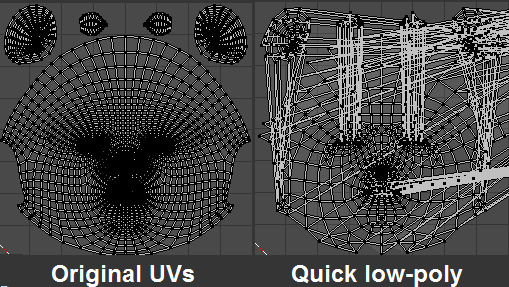 To deal with these problems, a second algorithm has been implemented, the faithful low-poly. It is faithful in the sense that UV seams are respected, so there are no faces stretching over unknown parts of the texture. 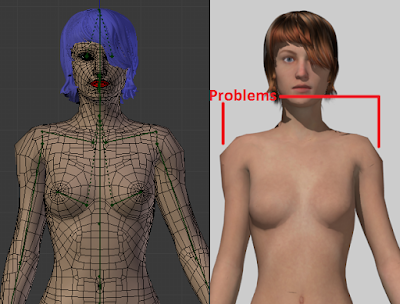 The footprint of the faithful low-poly is

This is slightly higher than the quick low-poly, but still a nice reduction. 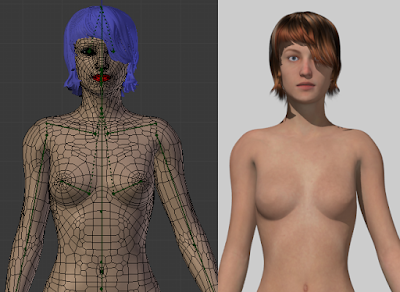 There are still some problems. In the illustration the shoulders become very jagged when posed. This can be fixed by adding a Subdivision Surface modifier. If the number of view subdivisions is set to zero, the viewport performance should not suffer too much. The Add Subsurf button at the bottom of this section does that for all selected meshes.

Another problem is that the algorithm produces n-gons, which sometimes leads to bad results. This can be fixed by the Split n-gons button.

After triangulating n-gons the character weighs

The number of  edges and faces has gone up considerably, but I'm not sure that this affects performance, since complicated n-gons have been replaced by simple triangles. The number of vertices stays the same, which is what I think is most important for performance.

The Quadidy Triangles button converts triangles to quads, using Blender's built-in triangle-to-quad tool. As with the Quick Low-poly, it is not guaranteed to maintain UV islands, but the problem is smaller and may be acceptable for background characters. 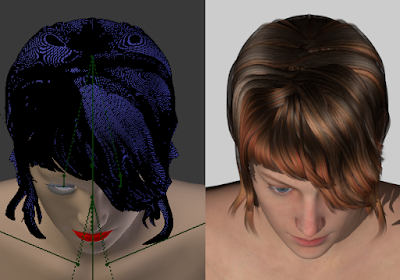 Hair can be particularly problematic for performance. The Aldora hair, which came with some earlier version of Daz Studio, has the impressive footprint

Reducing the weight of a 21,000 verts character makes little sense if we leave her with 123,000 verts worth of hair. 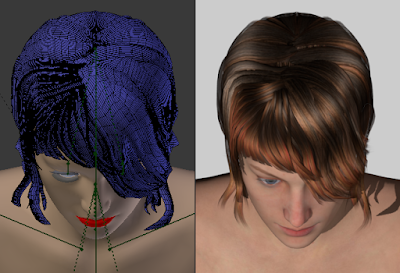 without any notable reduction of quality. 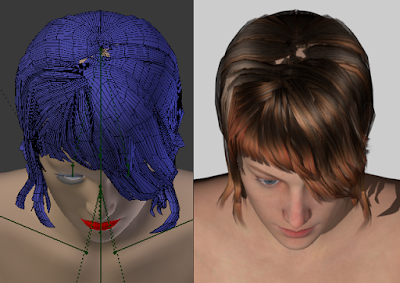 Compared to the original 123,000 verts, the footprint has gone down with more than a factor of ten!

We now start to see some bald spots on the head, but it should not be too difficult to fix them in edit mode. 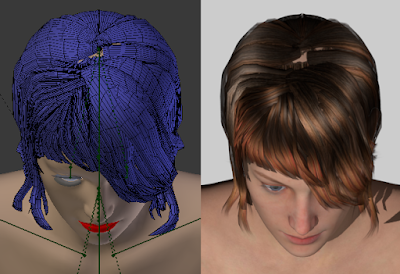 If we instead made a quick low-poly in the last step, the footprint became

The baldness problem is perhaps a little less pronounced, but some manual editing is still needed.

Another way to reduce the poly-count for some hair types is provided by the Select Random Strands button. Here is another hair with an impressive footprint:

Not all of the strands are really needed, but it would difficult to select a suitable set manually.

We don't want the skull cap to be selected, so we hide it (select one vertex on the skull, use ctrl-L to select connected vertices, and H to hide).

Select Random Strands to make the selection, and then press X to delete the verts. The Keep Fraction slider was set to the default 50% in this case. There is some tendency to baldness in edit mode, but that is because the skull cap is still hidden. The render looks quite ok but the footprint has been reduced to

Replacing meshes with low-poly versions can sometimes give problems. Since the low-poly faces are larger the skin can poke through. The Add Push offers a quick fix for this. It adds a shapekey named Push which moves the vertices along the vertex normals.

Here we replaced Ana's corset with a faithful low-poly version. There are some problems with the skin being visible through, but we fixed that by adding a Push shapekey and cranking up the value a bit. The value 1.0 corresponds to moving the mesh 1.0 cm along the vertex normals, so in this case we pushed the corset out 1.65 mm from the body.