During the last few months I felt rather fed up with 3D, but very recently I started to play with the Daz Importer again, and there are a few new things to report.

First, Daz has released a new character base, Genesis 8, which is available if you update Daz Studio to the most recent version. I must have been doing something right, because adding this character to the Daz Importer was surprisingly painless, even if there probably are some glitches left. The main problems had to do with the rest pose; Genesis 3 is in T-pose but Genesis 8 is in A-pose.

The other news is that character fitting can now be done with fbx files. In some cases this works better than obj or Collada (but in other cases it is worse). In particular, there has been a problem with the skeleton when some body parts are scaled. The Daz Importer uses the preview field in the duf file to determine the bone locations, and whereas this field takes most of the transformations into account, some scale transformations are ignored. However, they are included in the skeleton exported to fbx, so the importer can use this information to deduce the correct bone locations. 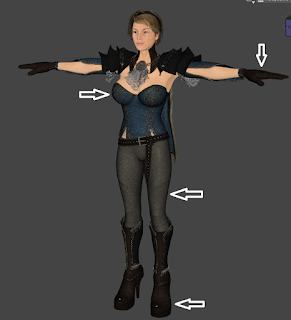 Here is a character in Daz Studio. The chest, hands and feet have been scaled, transformations that are not stored in the preview field in the duf file. In addition, the leg length and breast size have been increased. 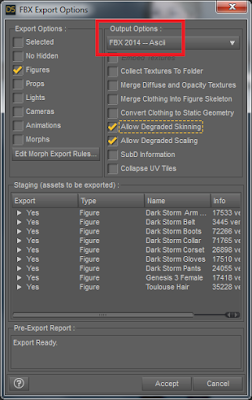 Export the character as an fbx file. It is important that you export it as an ascii fbx file; the importer can not read binary fbx and will generate an error if you try. The fbx format seems to change for every year, but it does not seem to matter which fbx version you select, as long as it is ascii. The other settings do not seem to be important, except that Allow Degraded Skinning and Scaling should be selected, because otherwise the exporter complains. 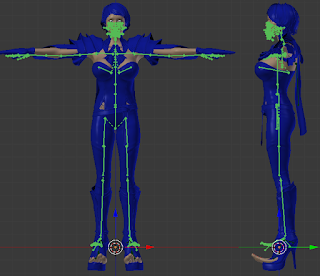 Here is the character imported with Mesh Fitting set to Obj File (blue clothes). The mesh contains all morphs, but the skeleton does not fit the mesh: the arms and head  are to low, because chest scaling is ignored, and the hands and the feet are too small. 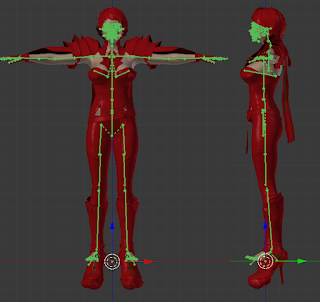 If we instead import the character with Mesh Fitting set to Dae file (red clothes), the armature fits the character mesh, but this is only because the scale transformations are ignored for the mesh as well. They are weirdly present in the clothes meshes, however. 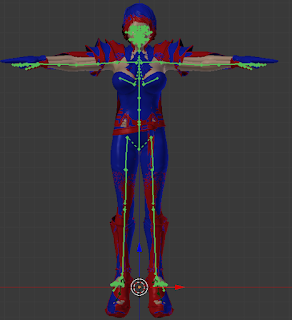 The red Collada character compared to the blue obj character.

There are also a problem with the boots. This must be a bug in Daz Studio's Collada exporter, because the boots look equally ugly when the dae file is imported directly with the Collada importer. 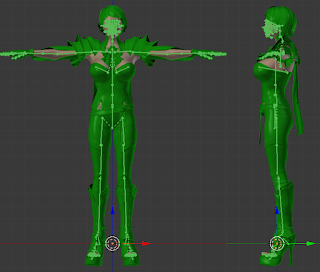 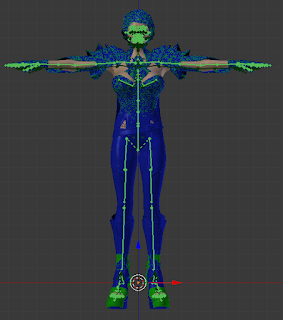 The mesh is the same as the blue obj mesh, and the skeleton fits the mesh. 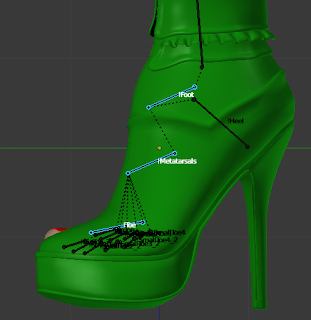 When writing this post, I realize that there still is a problem with the bones. The duf file specifies both the bone head (center_point) and tail (end_point), but the fbx format only contains formation about the bone's head and orientation. For simplicity, I chose to translate the tail the same distance as the head, but for the posed foot this gave the rather strange result show here.

This is probably not such a huge problem, and it goes away if you choose to Merge Toes.

However, there are other where fbx fitting produces worse results than obj or dae. In some cases the solution might be to import several versions of the character, with different types of Mesh Fitting, and only keep the meshes and rigs that are most faithful to the original.

Posted by Thomas Larsson at 7:39 PM