DAZ Studio is available for PC and Mac, but since I don't have access to any Mac the code has only been tested under Windows; more precisely, Windows 7. From user comments I have understood that there are problems to run the DAZ Importer under Mac, mainly because file paths are case-sensitive on Mac (?) but not on Windows.

As I said, I have no Mac to test on, but I do have a dual-boot machine with Windows and Linux. Linux is not really an interesting os for the DAZ importer, since DAZ Studio is not available on it, but it provides a testing ground for what happens with  a case-sensitive file system. In fact, somebody provided code for fixing problems with case sensitivity long ago (apologies for forgetting who), but the patch caused some obscure problems on Windows so I disabled it.

In the most recent unstable versions, the patch has been reinstated and I have managed to import DAZ files from my Windows hard drive under Linux. On Linux, it is crucial that the option Case-Sensitive Paths is enabled; it is found in the General section of the Settings panel. This option should be automatically enabled on Linux and Mac, and disabled on Windows, but because of some earlier confusion the default settings were switched. This bug is now corrected, but make sure that the settings are as in the figure below: 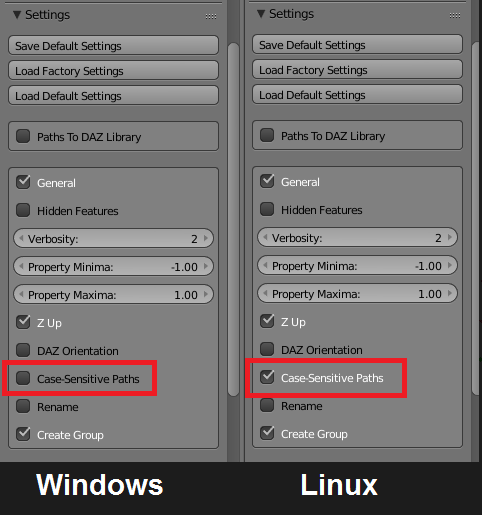 Here the same character has been imported and rendered under Windows and Linux. The lighting conditions and Blender versions are also different (2.79a vs 2.78), but the conclusion is that the add-on now works under Linux, at least for many characters. 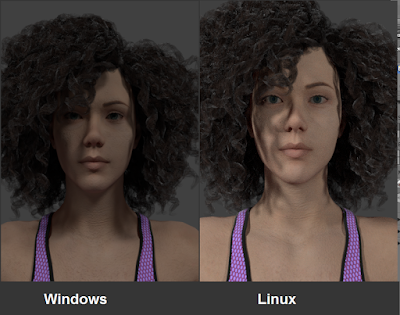 Since the DAZ Importer seems to work under both Windows and Linux, it will hopefully work on Mac as well.