Two new buttons (and a renamed one)

The new tool removes this extra layer of empties. 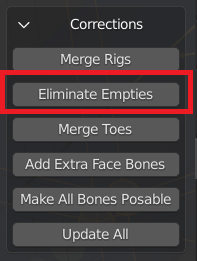 Select the parent armature and press Eliminate Empties. The empties are gone and the meshes are parented directly under the bone.

Eliminate Empties can be done before or after Merge Rigs. Or not at all if you wish to keep the empties.

Other vendors implement jacket buttons as empties that are instanced to a mesh. Instanced empties are important because they show up in renders, and therefore the Eliminate Empties button does not remove them.

The Import Correctives button imports Joint Corrective Morphs (JCM) for the active character. The Daz Importer has a build-in list of locations where it looks for such morphs, depending on the character type. This means that it will only find the standard JCMs provided by DAZ. However, some vendors provide custom JCMs for their  character. This is especially the case for monsters that deviate significantly from the standard character that they are based upon. 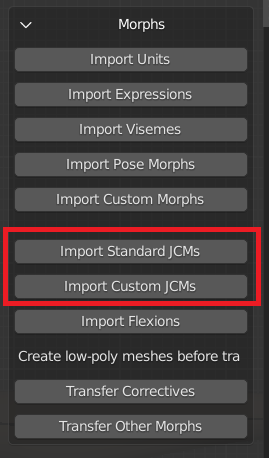 The new tool Import Custom JCMs opens a file selector which allows you to navigate to the location of the custom JCMs and load those that you need. In constrast, Import Standard JCMs, which is the new name of the old Load Correctives button, displays the list of standard corrective morphs provided by DAZ for the base character.

You can also load JCMs with Import Custom Morphs. That is not really useful, however, because then the shapekeys are driven by rig properties rather than bone rotations.

Transfer correctives should work for both standard and custom JCMs, since it transfers shapekeys driven by bone rotations irrespective of their origin.
Posted by Thomas Larsson at 9:34 PM