The concept has been renamed from Morph Preset to Favorite Morphs, because a morph preset denotes something completely different in DAZ Studio: a combination of morphs that give a certain expression. The names of the buttons has thus been changed to Save Favorite Morphs and Load Favorite Morphs, and the Easy Import option is called Use Favorite Morphs.
In fact, morphs presets in the DAZ Studio sense can be saved with the Save Pose Preset, and can then be used both in DAZ Studio and in Blender.

It is now possible to store a collection of morphs as a morph preset, which can be reused for other characters of the same type. A preset consists of any combination of standard and custom morphs for a genesis character, plus custom morphs for associated geografts and clothes.

Morph presets are normally stored in a directory specified in the global settings. 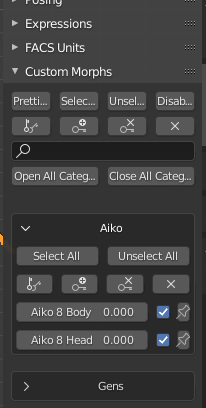 The buttons for saving and loading morph presets are found in the Morphs section of the Setup panel. 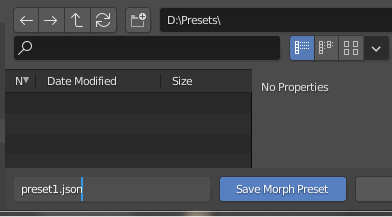 Select the parent rig and press Save Preset. A file selector opens up in the directory specified in the global settings. Choose a name for the preset and save the file.

Now load a different character, which however belongs to the same Genesis generation. Select the rig and press Load Morph Preset, and select the preset file that we just created. All morphs are loaded to the new character.

Morph presets are of somewhat useful by themselves, but their main use is in combination with Easy Import. Morphs must be loaded while bone names and meshes are still intact. This means that morphs must be loaded before geografts and lashes are merged with the main character mesh, and before the armature is converted to some more animator-friendly rig like MHX or Rigify. The used to limit the usefulness of Easy Import, because only standard morphs could be loaded at the right time. If we wanted to load custom morphs, the last steps had to be done manually, after the custom morphs were loaded.

With morph presets, this is no longer a limitation. 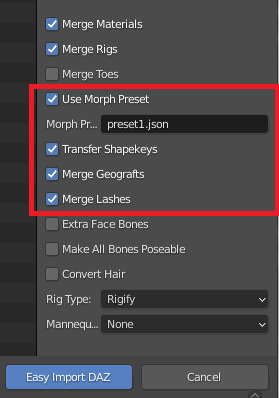 In the Easy Import options, enable Use Morph Preset. The checkboxes for standard morphs disappear, and instead a field appears were we can specify the morph preset file. The file is relative to the global morph preset directory, unless an absolute file path is specified.

We can now enable Transfer Shapekeys, Merge Geografts and Merge Lashes, knowing that these operations will be performed after all morphs have been imported. We can also choose a rig type which changes bone names like Rigify. 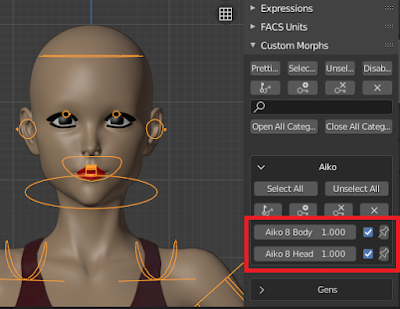 And now a animation-ready character is loaded with all the morphs in the morph preset.
Posted by Thomas Larsson at 5:44 PM