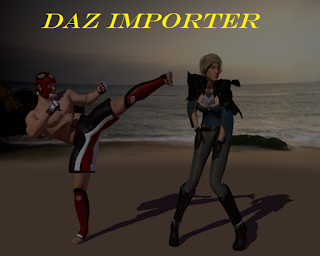 My 3D app is Blender, but I have played with DAZ Studio for quite some time, and found that it is a quite capable character creator. Since I have previously done something similar for the MakeHuman project, I wrote a Python script that imports native DAZ files (with file extensions .duf or .dsf) into Blender. In fact, the script is quite old and I have been using it privately for a long time, but recently I decided that it was time to complete it. The primary reason for writing this script is that I want to use it myself, but if somebody is interested it is now available for download.

The script repository is located at https://bitbucket.org/Diffeomorphic/import-daz

To download a zip file with the development version, go to  https://bitbucket.org/Diffeomorphic/import-daz/downloads.

There is also some documentation about the intended use at http://diffeomorphic.blogspot.se/p/daz-importer.html.

All assets needed to make the picture above were imported from DAZ Studio: the characters, the clothes, the poses, and the environment. The only manual intervention was to set up the lighting and make some minor tweaks to the woman's pose.

Posted by Thomas Larsson at 6:28 PM

Diffeomorphic is my new blog where I will collect my thoughts on physics, 3D graphics, history, languages, and other stuff that might interest me. Mostly but not exclusively in English.
Posted by Thomas Larsson at 9:51 AM