Originally I planned to wait with the next release until after Blender 2.80 was available. However, since the development version is so much better than version 1.3, especially when it comes to materials, I decided to make a new stable release, version 1.3.1. It can be downloaded from https://www.dropbox.com/s/0tfwk7v82116nt3/import-daz-v1.3.1-20181016.zip

The progress on materials, which I have already written about here, are due to many helpful bug reports by users engetudouiti and Alessandro Padovani. As I myself have a very limited understanding of Iray materials, and am not very good at Cycles either, these improvements could not have happened without their help.

The documentation has not been updated since version 1.3. The current user interface differs slightly from the one described in the documentation, but hopefully this should not cause serious problems. When you import a Daz file, the materials section in the import options now looks like this: 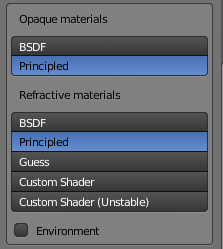 For opaque materials there are two options, depending on whether we want to use the principled node or not. For refractive materials there are three more options: the Guess option is good for eyes, and the Custom Shader is a quite complex node setup that should mimic refractive Iray materials very closely. Finally, the Environment checkbox allows us to import environment maps from Daz Studio. This is useful if you want to import complete Daz scenes, less so if you use Daz Studio as a character generator.

When the add-on is enabled, there is a warning message in the terminal: "Warning: This script was written Blender version 2.80.0 and might not function (correctly), though it is enabled". This is normal and nothing to worry about. The goal is that the future version 1.4 should run on both Blender 2.79 and 2.80, and as a first step in this direction the Blender version has been changed to 2.80.

Posted by Thomas Larsson at 8:15 PM