This section could be called ”Poor man’s animation layers”. A loaded mocap animation usually has imperfections that must be edited, but without changing the overall feel of the motion. The Start Edit button creates a new animation layer where differences from the original motion are stored as keys, called delta keys since delta often denotes a difference. 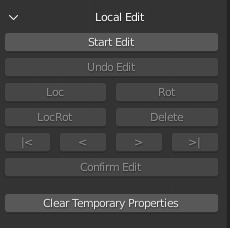 The delta keys are represented by markers in the timeline.

A delta key can be added with the Loc, Rot and LocRot buttons, and removed with Delete. There is no way to view the delta keys directly. In the viewport and the curve editor, the final pose is shown, which is the sum of the original pose and the delta key.

A common use for delta keys is to correct for intersection with other objects or the character herself. The typical workflow is as follows: