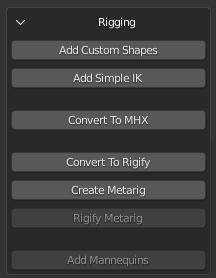 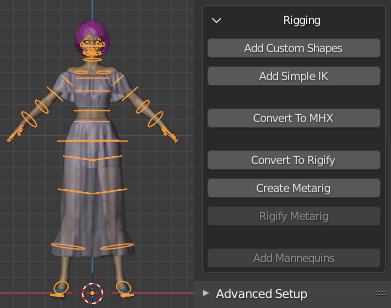 This button adds custom shapes to the bones, to make them easier to recognize during posing. 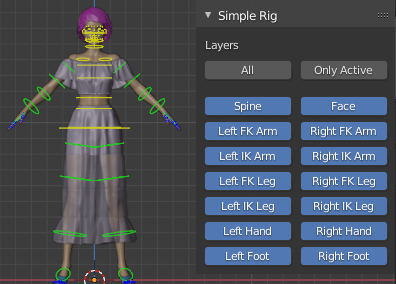 It also moves the bones to new layers and opens up a new panel called Simple Rig, where named bone layers are displayed. 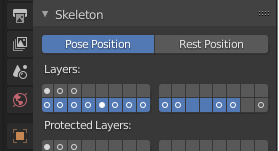 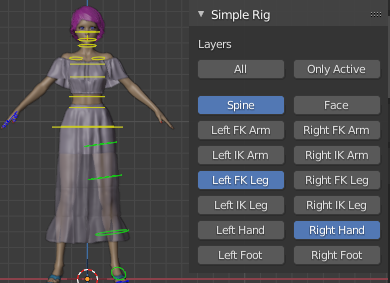 By only selecting the named bone layers that we are currently working on the rig becomes less cluttered.

This tool adds IK (Inverse Kinematics) bones to the existing DAZ rig. This simple IK rig is not as powerful as the more complex MHX and Rigify rigs, but can be an alternative for simple posing. The Add Simple IK button is only enabled for armatures to which custom shapes have been added. An alternative could be to use Auto IK for posing the original FK (Forward Kinematics) bones. 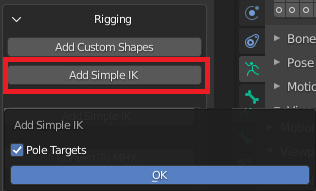 When we press the Add Simple IK button a dialog pops up, asking us if we want to add pole targets to the IK rig. 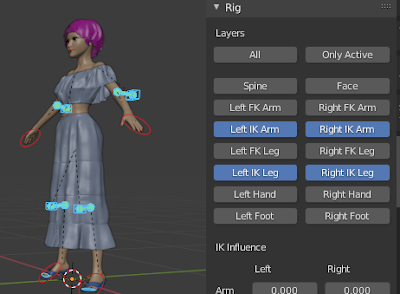 Here are the new IK bones. There are IK effectors for hands and feet (red ellipses), and pole targets for posing the elbow and knees (blue boxes). There are also stretch bones that connect the pole targets with the bones they control. 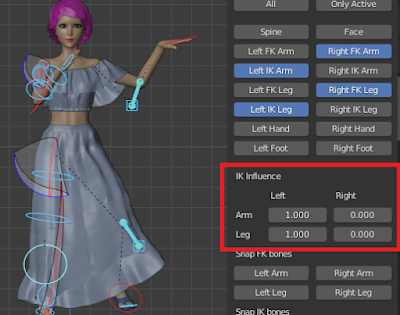 In the Simple Rig panel we can control the IK influence below the named bone layers. Here we have pose the left arm and leg with IK and the right side with FK. 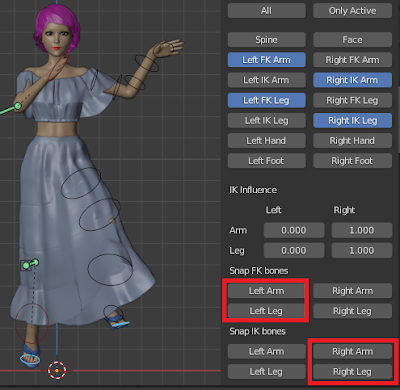 The snap buttons convert an FK pose to IK or vice versa. Here we snapped the FK bones on the left sides to the IK pose, and the IK bones on the right side to the FK pose. The pose is the same as in the previous picture (almost at least), but the IK influences have been reversed.

The MHX rig was originally developed by myself when I was working on the MakeHuman project.The acronym stands for MakeHuman eXchange, although the DAZ version has nothing to do with MakeHuman anymore. The MHX rig has been greatly improved in version 1.6 of the DAZ Importer, thanks to input from Engetudouiti and Alessandro Padovani.

The MHX Runtime System has been split off as a separate Blender add-on, which is distributed together with the DAZ Importer. There are several reasons for this. People who don't use the MHX rig don't have to enable the MHX RTS, saving some memory and space in the UI panel. More importantly, the BVH Retargeter was also MHX aware, so there were two versions of the same code, which essentially did the same thing but were slightly different. Documentation for the MHX Runtime System. 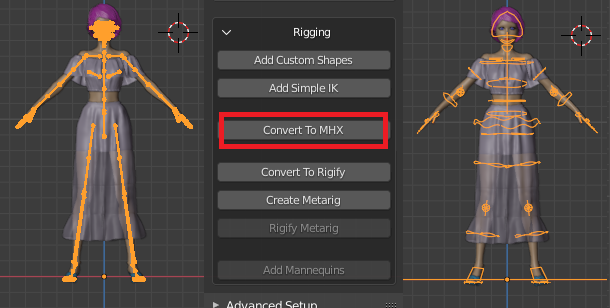 Press Convert to MHX. There are a number of options. 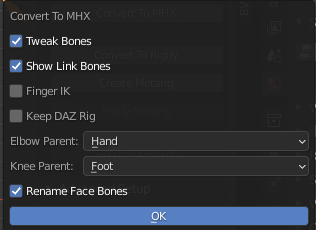 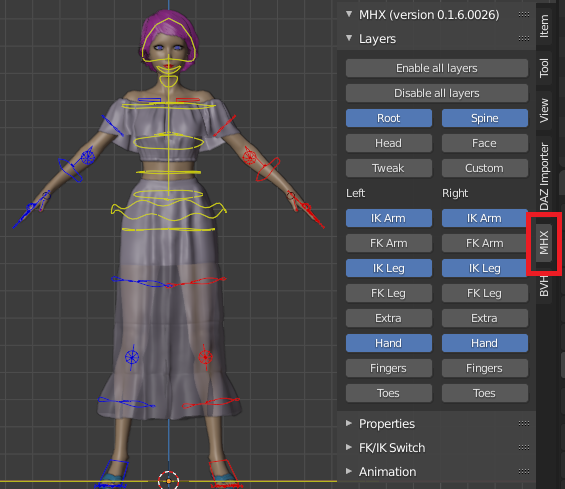 Aiko is now controlled by an MHX rig. It starts out in IK (Inverse Kinematics) mode, and the IK layers are enabled. 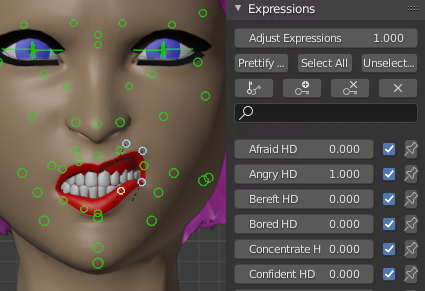 When an MHX rig is selected, the MHX RTS tab contains controls that are useful for posing it. See the Documentation for the MHX Runtime System for more details.

DAZ characters can also be rerigged with the popular Rigify add-on by Nathan Vegdahl and others. Links to documentation about Rigify in general:

First we must make sure that the Rigify add-on is enabled. It is bundled with Blender and is found in the Rigging category. 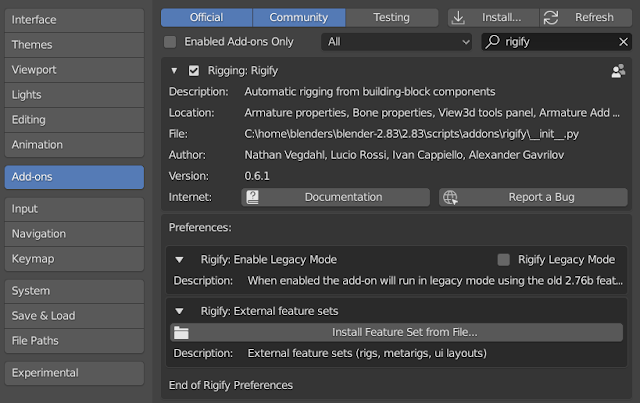 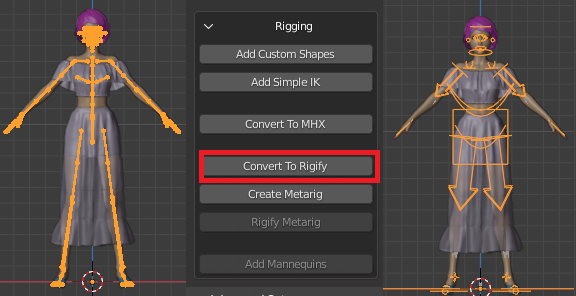 After a short time the rig is converted to Rigify. 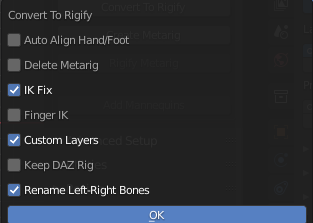 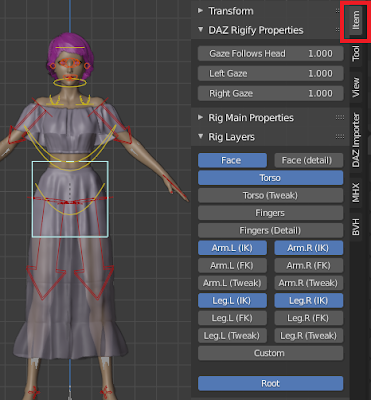 Runtime controls for Rigify are found in the Item tab in the UI panel to the right of the viewport. The Rig Main Properties panel depends on the active bone. 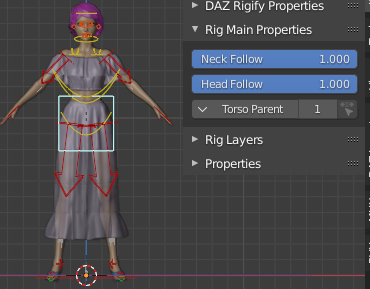 Here are the properties for the hip, 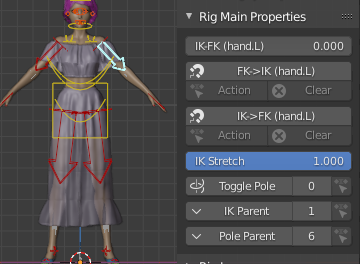 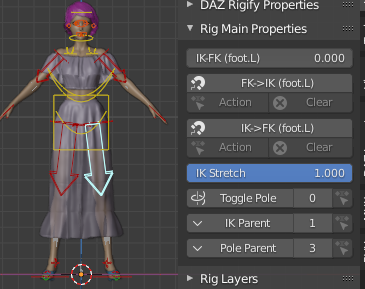 and for the legs.
Facial bones and rig properties are copied to the Rigify rig, so face units,  expressions and visemes continue to work, including the extra layer of tweak bones. 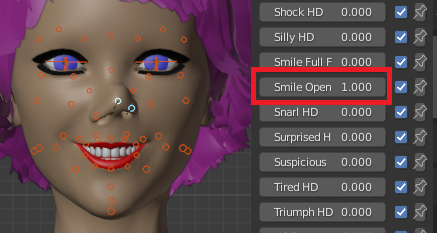 The face bones are found on the Face (detail) layer (bone layer 2) in the rigified armature. 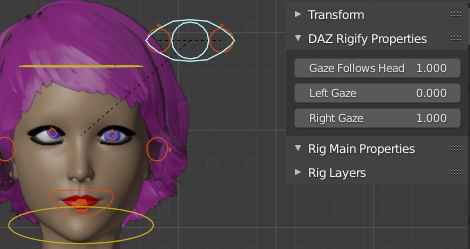 The gaze bones are the same as the MHX rig gaze bone. They are controlled by the Gaze properties in the DAZ Rigify Properties panel. 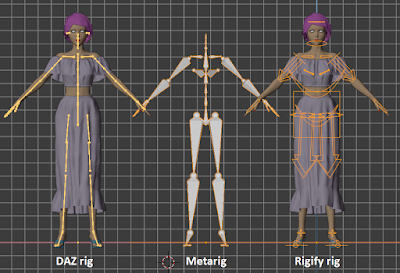 The two last buttons in the Finishing section splits the Rigify button into two steps: Create Metarig and Rigify MetaRig. Having access to the metarig can be useful for tweaking it before the rigify step.

DAZ characters often have quite a large polygon count, which may affect viewport speed. This is especially true if you try to animate scenes with several characters or you use an old computer. Replacing meshes with low-poly versions helps to some extent, but the viewport can still be painfully slow. It appears that the main obstacle is deforming meshes with an armature modifier and vertex groups.

This is where mannequins come in. A mannequin is a collection of meshes that don't have armature modifiers, but instead are parented directly to bones. Tests indicate that posing with mannequins is much faster than with normal characters. If the meshes and the mannequin belong to different collections, the meshes can be excluded from the scene during posing, which vastly improves viewport performance.

The suggested workflow is thus: 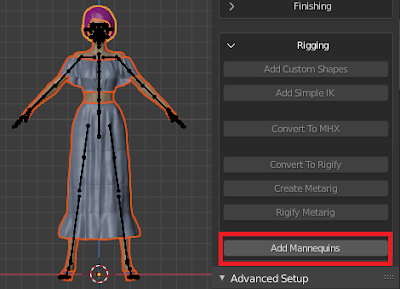 Select the meshes (not the armature) that you want to make a mannequin for, and press Add Mannequin. 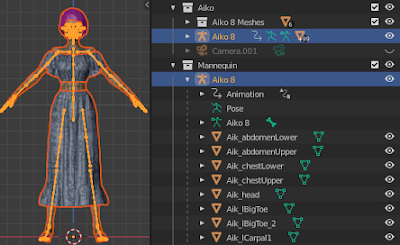 After Add Mannequins has been pressed, there are many new meshes parented under the rig. These meshes are parented to different bones and named rig-name_bone_name. 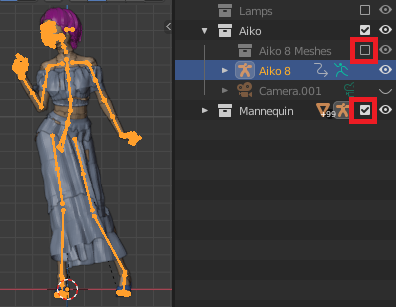 Because the meshes and the mannequin belong to different collections, we can quickly exclude the meshes from the scene and pose the mannequin. The viewport is usually very responsive at this point, because no vertex groups have to be evaluated. 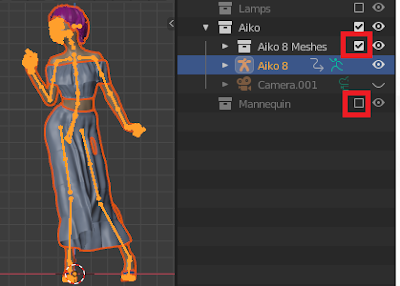 When we are happy with the pose, we exclude the mannequin and bring back the proper meshes f or rendering. Usually the pose has to be tweaked a little at this point.