Since the latest release of the DAZ-Blender importer I have mainly been tweaking materials. It is pretty important that the importer produces attractive materials automatically, because DAZ meshes contain lots of materials, and modifying all of them manually involves a lot of work. E.g., I think that a human uses some seventeen different materials for different parts of the body. This has some advantages in DAZ Studio, because you can easily add makeup by modifying the lip, eyelash, fingernail or toenail materials, but having so many materials does complicate editing afterwards in Blender

As a benchmark I will use the barefoot dancer is a standard product that ships (or used to ship, at least) with DAZ Studio. You can find pictures of her with Google, but since I don't know if it is legal to include other people's art on your blog (it is at least impolite), you have to look them up yourself.

So here is what I did. First I created to DAZ Studio (.duf) files, one containing the character in rest pose and the other the stage (Shaded haven). Then I created two Blender files. In the first I imported the stage, which required some tweaking because the importer does not always get object transformations right (working on this). Into the other I imported the character and merged the rigs (character, hair and each piece of clothing have separate rigs). Actually, every import was made twice, once with Blender Render being the render engine, in order to get the Blender Internal (BI) materials, and once with Cycles to get Cycles materials.

Finally, the set file was linked into the character file and the animation was loaded. I also loaded expression and chose something suitable, and created a simple three-point lighting setup. Here is a render using Blender Internal. 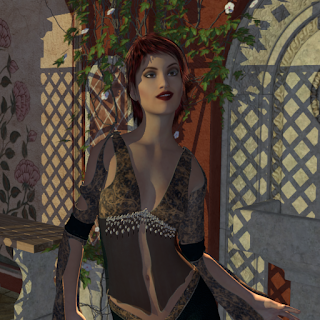 If you change the render engine to Cycles, the importer creates a Cycles material instead. Now, I have never really used Cycles and I don't understand how to control lights in it - it seems like most of the lighting comes from a world surface light whereas the actual lamps play a very marginal role. But even if the lighting is extremely dull, I think the materials look reasonably good. 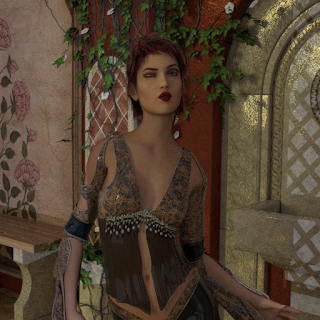 The renders were made with the unstable version of the DAZ Importer, which can be downloaded from
https://bitbucket.org/Diffeomorphic/import-daz/downloads.

Posted by Thomas Larsson at 7:19 AM