Updated October 10, 2021: There are some changes in the scripting interface in version 1.6.0 of the DAZ Importer. See Scripting for version 1.6 for details.


Recently we discussed how to import a Daz scene and merge rigs from Python, but we did not attempt to import morphs to the new character. Afterwards I realized that doing so does not work at all. The problem is that the operators which import multiple files use a collection property, and specifying collection properties from Python seems impossible. At least I did not figure out how to do it.

Instead the problem is solved in a different way in the development version: with a global variable. Whenever the UI creates a file selector that generates multiple inputs, we need to call the function

before calling the operator. This function sets the global variable from which the filepaths are taken.

So let us write a script that imports various things from Python. We start by importing the relevant modules and settings up the root path.

With the character rig or mesh active, we next import three morphs that close the eyes 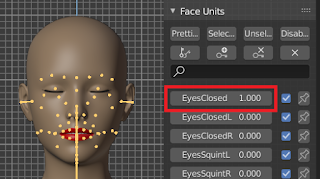 If we have invoked the operator with the 'INVOKE_DEFAULT' argument, it would instead have launced a morph selector in the same way as the Import Units button does.

Next we import two custom morph 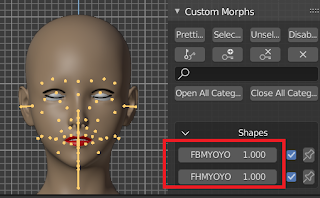 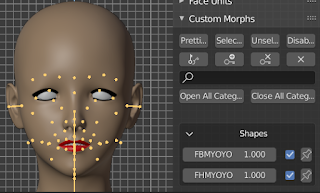 Then we import some standard JCMs

This technique is not limited to importing morphs. The next code snippet resizes all textures that involve the arms. At this point the active object must be the character mesh, the blend file must be saved, and we must have saved local textures. Otherwise the operator will fail with a polling error.

Finally we change the active object to the armature, and load the first three poses in the Base Poses directory. 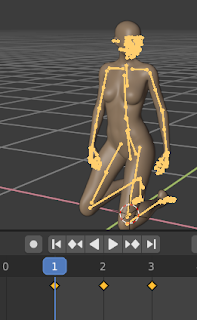 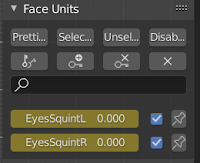 The eyes closed morphs are removed but the eyes squint morphs remain.

An updated list of operators can be found at https://diffeomorphic.blogspot.com/p/daz-operators.html. It specifies the operators that use import_daz.setSelection to get its arguments.
Posted by Thomas Larsson at 2:23 AM