An issue that comes up repeatedly is how to merge several geografts to a character. The necessary merge information is stored in the meshes when they are imported. However, the information consists of vertex number, and is thus corrupted if a mesh has been edited, e.g. by merging other geografts to it. Therefore, one must follow a strict procedure when merging several geografts:

Let us show how these rules work in practice. 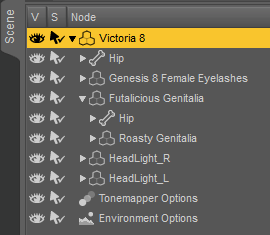 In DAZ Studio, we have Victoria 8 with the Futalicious and HeadLights geografts. Moreover, Futalicious has a geograft itself: Roasty.

Here are the geografts in Blender, after all rigs have been merged with the Victoria's rig.

Roasty has now been merged with Futalicious and has disappeared as an independent mesh. The remaining geografts are all on the same level, and must be merged with the character mesh at the same time. Select Futalicious, HeadLight_L, and HeadLight_R, and then shift-select Victoria to make her active. Merge Geografts again.

Now all geografts have been merged with the Victoria mesh. The only thing that remains is to join the eyelashes with the head. The eyelashes are not geografts, so they can be joined using Blender's built-in Join Meshes command. 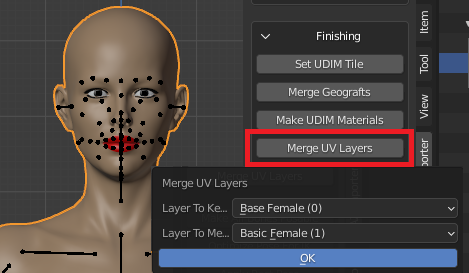 The joined mesh has two different UV layers, which have to be combined using Merge UV Layers tool.
Posted by Thomas Larsson at 11:30 AM