Before we can start importing DAZ (.duf, .dsf) files into Blender, we must make a few preparations.

The plugin contains a directory called to_daz_studio, which contains a single folder called Scripts. Copy or link the Scripts folder to one of the DAZ Studio directories. It probably already has a Scripts folder. 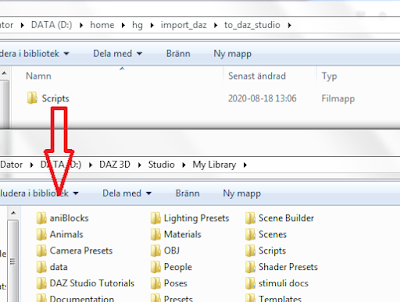 Now start DAZ Studio. In the Content Library tab, open the Scripts folder and then the Diffeomorphic subfolder. It contains five scripts. 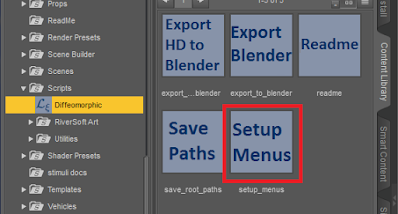 In order to figure out the final worldspace locations of all vertices and bones, the DAZ Importer needs a .dbz file with that information. This is created with the DAZ script export_to_blender.dsa.  which is accessed from a menu in DAZ Studio. In previous versions of the plugin that process had to be done manually. That can still be done, following the instructions here, but there is now a simpler way. Double-click on the script Setup Menus.

In the File menu two new entries are created: Export To Blender and Export HD To Blender. The first script generates the extra data that the Blender plugin needs, and normally it is what you want to use. The other script is experimental and stores additional high-definition data, which can be useful for baking normal maps in Blender. 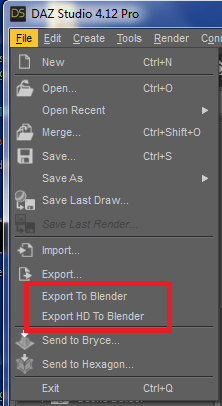 The two export scripts can also be accessed directly in the Diffeomorphic scripts folder, by double-clicking on the corresponding icon. If you prefer to do that, it is not necessary to set up  menu items.

Save the DAZ root paths

Unlike OBJ or FBX files, a file from DAZ Studio (.duf, .dsf) is not self-contained. Instead it contains pointers to other DAZ files, which may contain further pointers or the actual data. The pointers are given relative to the DAZ Studio root directories, which are listed at the top of the Content Library tab in DAZ Studio. 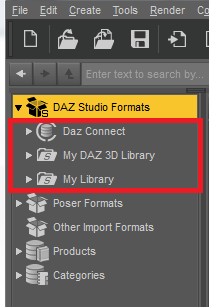 It is absolutely mandatory that you have the same root paths in Blender as in DAZ Studio, because otherwise the Blender plug-in will not find your assets at all. In previous versions the way to fix this was to type in the root paths by hand. However, this is rather cumbersome, even if you only have to do it once if you save the settings afterwords. Now there is a script which automatically extracts all root paths in Daz Studio and saves them to a file that can be loaded in Blender.

Double-click on the Save Paths icon. A file selector asks for a location to save the information. 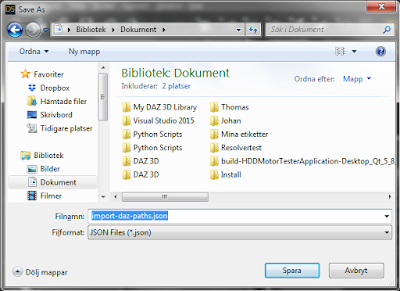 A message box informs us that the file has been saved.

Download a zip file with the DAZ importer. The development version can be found at  https://bitbucket.org/Diffeomorphic/import_daz/downloads/. The stable version 1.6 is bundled with the MHX runtime system with the same version number. Download the latest version 1.6.1 from https://www.dropbox.com/s/ufps8ip4xqxyqy3/import_daz_mhx_rts_v1_6_1.zip.

The following step is only necessary if you already have an old version of the DAZ Importer installed. Previous versions of the addons will prevent that the new files are copied to the right location. We must therefore remove them before we can install the new version.
Open Blender and the Blender Preferences window. In the Add-ons tab, unstall the add-ons (DAZ Importer, MHX Runtime System, etc.). 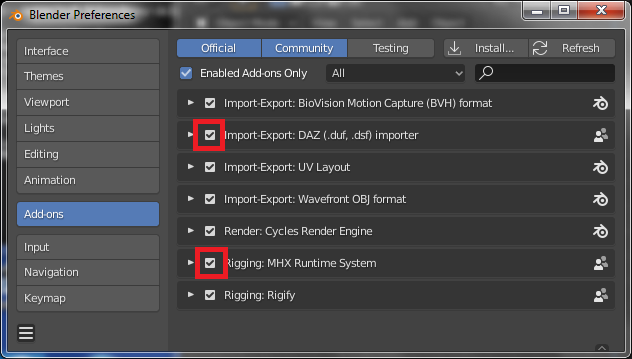 Quit Blender and go to the location where Blender stores the add-ons. On my computer it is C:/Users/Thomas/AppData/Roaming/Blender Foundation/Blender/2.83/scripts/addons. 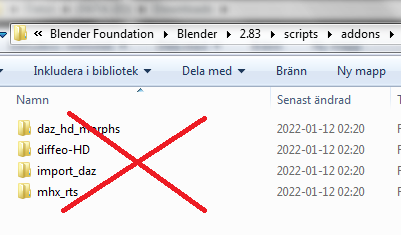 Delete the folders that contain the old versions of the add-on. Now the old add-ons will not cause any conflicts and we can proceed to install the add-ons.

Open Blender and the Blender Preferences window. In the Add-ons tab, press the Install button to install the add-on.

Navigate to the downloaded zip file and press Install Add-on.

The add-on has now been copied to your Blender addons folder. Select the checkbox at the upper left to enable the DAZ Importer.

To install the MHX Runtime System as well, change the search field at the upper right to "mhx" and enable the checkbox.

Two addional tools are bundled with the stable version, cf Content of zip file. Import daz HD morphs is a Blender addon by Xin to generate rigged HD meshes, HD shape keys, normals and vector displacement textures from daz HD morph files. Below is the discussion about this addon:
https://bitbucket.org/Diffeomorphic/import_daz/issues/357/blender-addon-to-generate-rigged-hd-meshes 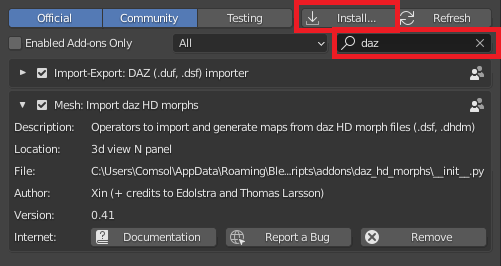 Change the search field to daz, the Import daz HD morphs addon can be installed.
Three new tabs now appear in the UI panel to the right of the viewport: DAZ Importer, MHX, and HD Morphs. They contain the tools that are related to the add-ons. 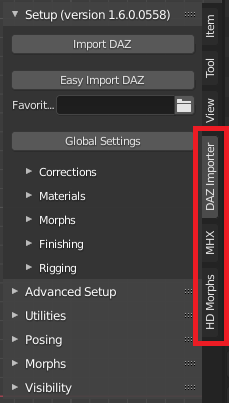 Setting up the DAZ root paths

Before we can start to import DAZ files, we must make sure that the DAZ root paths are the same as in DAZ Studio. To this end, press the Global Settings button to open the settings dialog. 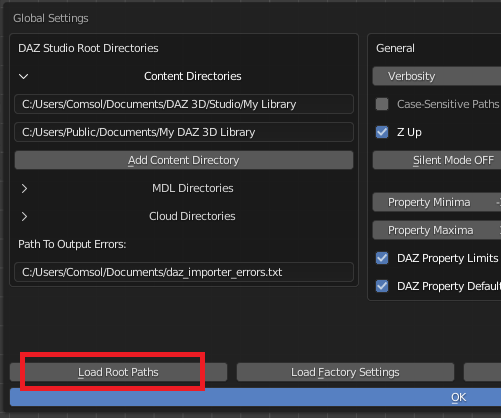 The most important settings are the DAZ root paths to the left. They are divided into three categories: content directories, MDL directories, and cloud directories. It is absolutely necessary that the root paths are the same as in DAZ Studio, because otherwise the DAZ Importer will not find your assets.

The default root paths may work in Windows if you have installed DAZ Studio with the default settings. However, if you use non-standard locations for your assets, or access assets over the web, or use a Mac, these settings will not be right. To fix that, press the Load Root Paths button. 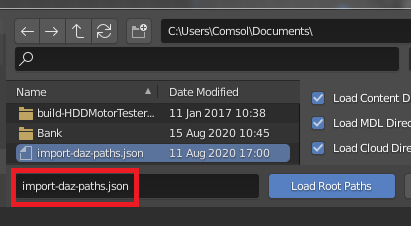 In the file selector, find the file with the root paths that you save in DAZ Studio before. The options to the right you can choose which types of content directories you want to load. Normally all three types should be loaded, but if you have a lot of cloud directories that you know that you never uses you might want to uncheck those. 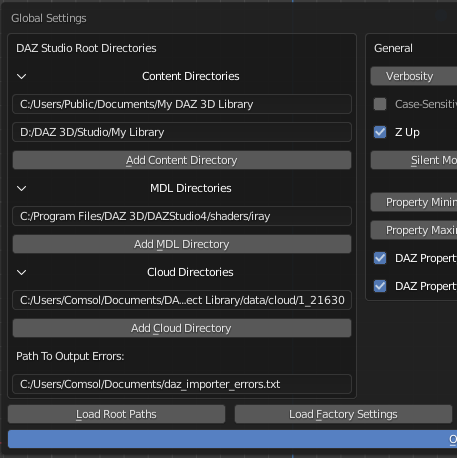 And now when the root directories are the same as in DAZ Studio, we can actually start importing DAZ files.