After the import_daz add-on has been enabled, we can import the duf file into Blender. There are two ways to do this. The Import DAZ button is intended for general DAZ scenes. After a scene has been imported with this tool, we almost always have to fix it in various ways before it is ready for use. An alternative is to use Easy Import DAZ, which is primarily intended for importing a single character and making it ready for posing in a single click. Below the Easy Import DAZ button we can specify a file with favorite morphs, which are added to the character. 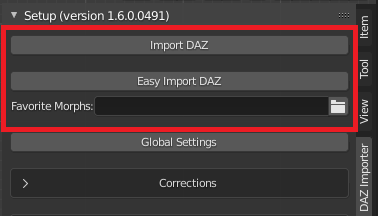 Easy import is discussed in the blog posts Easy Import and  Favorite morphs and easy import.

The simplest way to import the file is to press the Import DAZ button at the top of the Setup menu in the DAZ tab, which is located in the UI shelf to the right of the viewport. An alternative is to go to File > Import > DAZ Native (.duf, .dsf). Since we almost always need to do further work on the character in the Setup panel after it has been imported, I prefer to use the button.

Either way, a file selector window appears. Navigate to the file aiko.duf which we saved in DAZ Studio, select it and press Import DAZ File. Alternatively, we can select the preview icon. 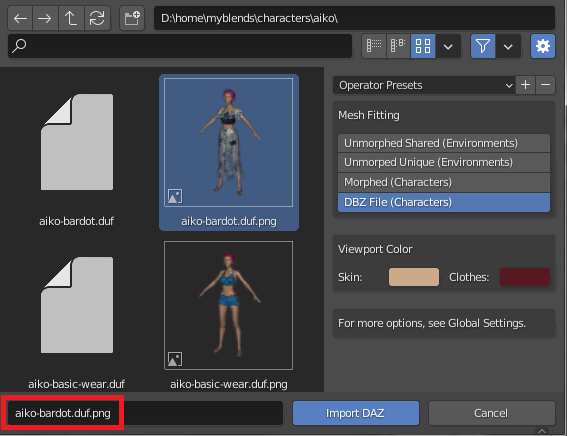 Before importing the scene, we must consider the import options to the left.

There are many more options in the Global Settings panel which affect how the scene is imported. However, normally those settings rarely changed. 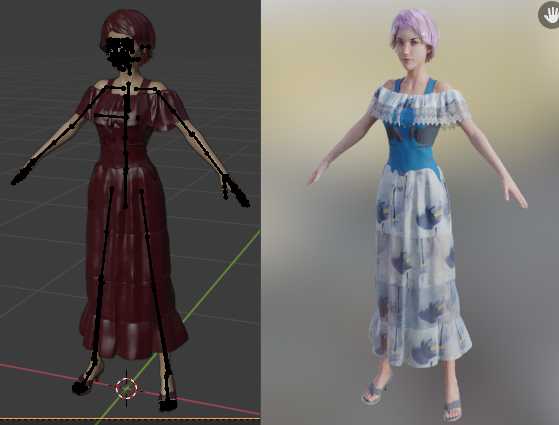 Press the Import DAZ File button, and after a short time Aiko and the camera are loaded into Blender. We see that the viewport color does not affect the rendered image.

The Mesh Fitting options are better explained using another scene with two characters. 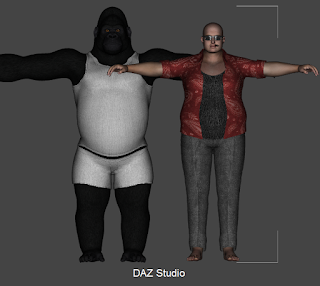 Here are two characters in DAZ Studio. The gorilla and the mafioso are both based on the original Genesis character, so the underlying mesh is the same. The result in Blender is very different depending on how meshes are fitted.

With the two Unmorphed options (Unmorphed Shared and Unmorphed Unique), the Genesis character is loaded without any modification. In the first case the characters also have the same gorilla texture because they share the same mesh, and in the second case the unique meshes have different textures. With DBZ File fitting, the result looks very similar to DAZ Studio.

The two viewport colors determine the viewport color of the meshes. This is merely a visual aid during during posing, and does not affect the final renders (in Cycles and Eevee, the Blender Internal renderer, which was discontinued after Blender 2.79, uses the viewport color as the diffuse color, but in that case the importer does not change it). 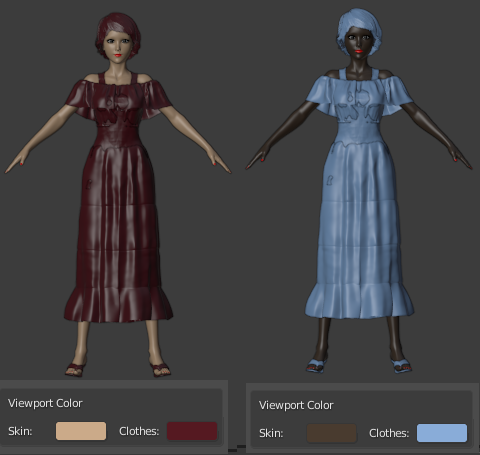 Here is Aiko imported with different settings of the Skin and Clothes viewport colors.

The Import DAZ tool is a general tool for importing DAZ Studio scenes, but almost always we must perform several more steps before the characters are ready to be posed. It may be difficult to know exactly which tools to use and in what order. The Easy Import DAZ tool is intended to solve these problems. 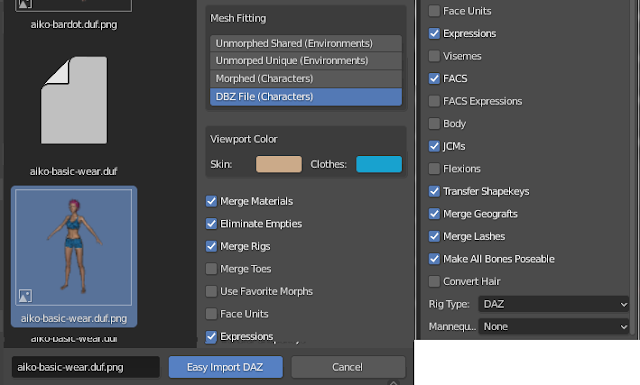 A file selector opens where we select the duf file that we saved in DAZ Studio. The options allow us to select how the character is imported and which tools are applied to after it has been imported. 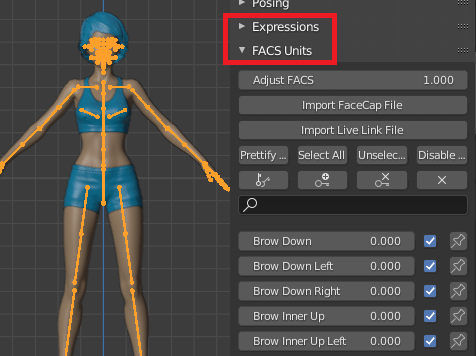 Using the settings above, Aiko is imported, with a single armature controlling both body, hair and clothes. Eye-lashes and geografts have been merged with the main mesh. In the DAZ Importer tab panels for controlling Expressions and FACS Units appear, since those where the kind of morphs selected above. 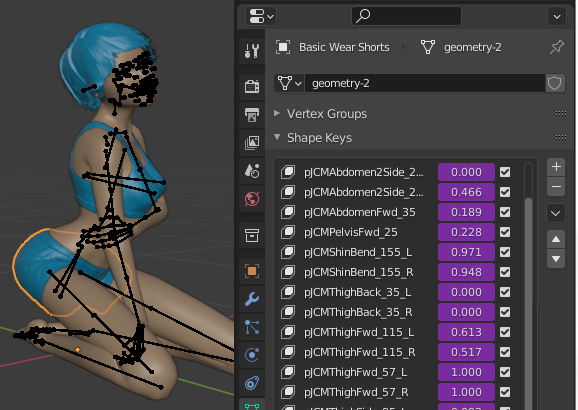 Both the character itself and the clothes have corrective shapekeys, since the JCMs and Transfer Shapekeys options were enabled.

In the Easy Import options, we can select the kind of morphs that we want to include. However, the options only include standard morphs, which are supplied by DAZ as part of the DAZ Studio distribution. We may want to add other morphs to the character, made by DAZ or by other vendors, or we may want to add morphs to clothes or geografts. Such custom morphs can be added during Easy Import, if we include a link to a file with favorite morphs. Such a file can be specified in the field just below the Easy Import DAZ button. This option is located here because a file selector can not be opened from within another file selector. 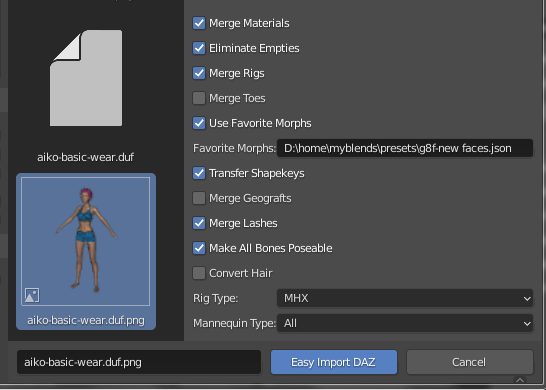 Now we import Aiko again with some other options. When Use Favorite Morphs is enabled, the file path to the favorite morphs appear, without the folder button to the right this time. Also the individual standard morphs have disappeared. We set the Rig Type to MHX and the Mannequin Type to All. 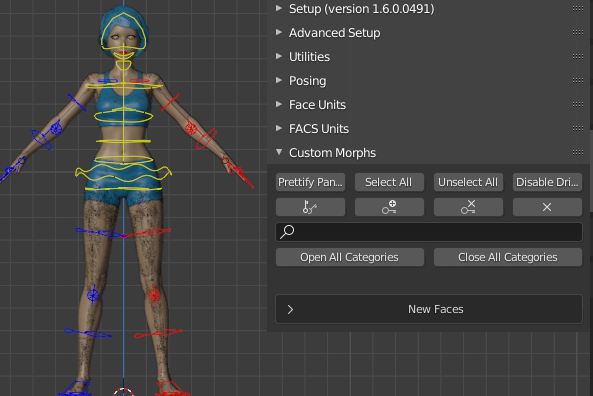 This time Aiko is controlled by the MHX rig. The mesh appears dirty because of the mannequin meshes. The morphs specified by the favorite morphs file appear in the panel, both standard and custom morphs.

Here are some of the custom morphs. 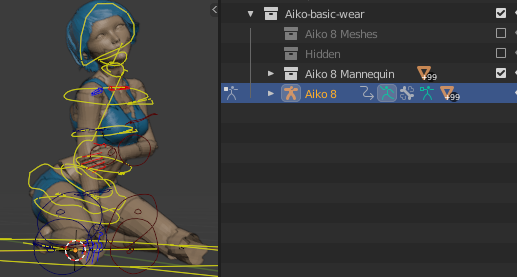 The mannequin is a collection meshes that are parented to the individual bones instead of an armature modifier and vertex groups. It can be used for rough posing since it has better performance in the viewport.

There are a few things that can go wrong during import. 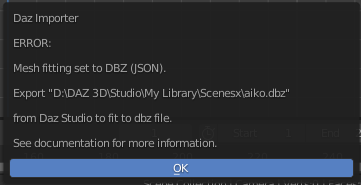 This error it means that the .dbz file needed for fitting the mesh is missing. The world-space coordinates for vertices and bones are stored in a .dbz file with the same name as the .duf file that we import. Since we are importing the file aiko.duf, there must exist a file named aiko.dbz in the same directory. To create this file, export to Blender from DAZ Studio as described in the export documentation. A .duf file saved in DAZ Studio does not contain the actual data in the way that Wavefront object or Collada files do. Instead it contains links to various asset files in the DAZ libraries, and these assets can link to other asset files as well. In order to find the assets, the DAZ importer needs to know where the DAZ libraries are located. To fix this problem, make sure that the DAZ root paths are set up correctly, as explained in the setup documentation.

If you are on a case-sensitive file system such as Mac or Linux, make sure that Case-Sensitive Paths option is turned on. It is found in the General section of the Settings panel. This option should automatically be set to the correct value for a given operating system, but if the importer complains about missing assets this may be the problem.

If the Verbosity setting (in the global settings dialog) is sufficiently high, the Daz Importer generates an error for missing assets.