The Daz importer has mainly been developed on my home computer, although I have occasionally tested the code at work. Both computers are very similar: both run Windows 7 and my user name on both is Thomas, which is a standard Christian name without any strange characters. However, I also own a laptop running Windows 10, which I have never used very much, but I thought that it would be a good idea to test the code on it.

So I created a new user on the laptop, whose user name Åke Öst contains non-ascii characters, and downloaded Blender, Daz Studio, and the Daz importer. Saving the .duf file in Åke's user directory worked fine, and I could also export a json file to the same folder. However, when I tried to import the .duf file, the error below was encountered. 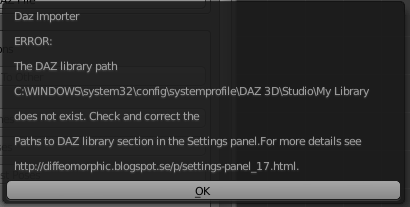 In Python the current user's home directory is represented by the string ~, which in this case should evaluate to

but instead Python thinks that it is

Since no directory with that name exists, the importer can not find the paths to the Daz directories, and the error is issued to alert the users about this fact. 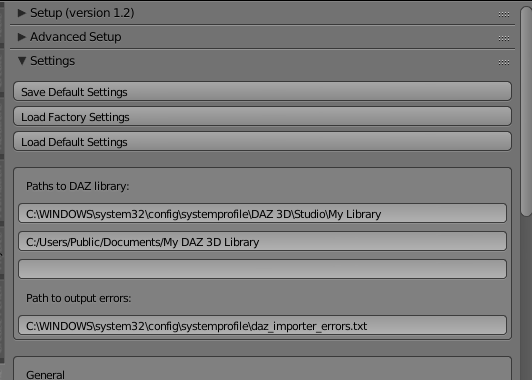 We can inspect the paths at the top of the Settings panel. Both the first Path to DAZ library and the Path to output errors start with the flawed directory and will not be found. Fortunately, this problem is easy to fix. Simply replace the incorrect beginnings with the right one (the paths really contain the substrings "Åke Öst", even if Blender uses a font that makes it indistinguishable from "Åke Ost". Finally press Save Default Settings to avoid having to do this correction every time Blender starts up. 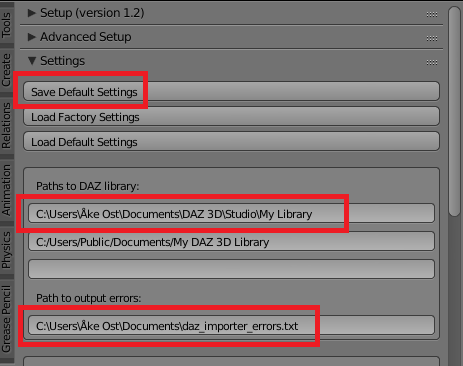 The non-ascii characters turned out to cause one more headache. The import script is stored in a single location, and then I have made symbolic links (hard links or junctions in Windows lingo) from Blender's addons folder. This means that I don't have to update the script when a new Blender version comes out, only the links. However, I make the links by running the mklink /j command at a DOS prompt, and that mangles the non-ascii characters. The string "Åke Öst" becomes "+ke Íst", and no link is created.

There is probably some way to make a terminal window understand non-ascii characters, but instead I downloaded the Link Shell Extension, which is a graphical tool for making links.  Worked like a dream. Just be sure to download the appropriate prerequisite package before the tool itself — both are linked to on the tool’s download page.

While non-ascii characters caused some headache, they are still within the UTF-8 character set. The code has not been tested with systems that use Unicode, and I am completely sure that new problems will show up in such settings.
Posted by Thomas Larsson at 5:30 PM